The menagerie in Užtiltė village, Zarasai district, has been functioning for already eight years. The establisher of the menagerie, Irena Sakalauskienė, named the menagerie after her daughter. Over 30 graceful animals live in the shelter of the forest, in a 5 ha enclosure.

A red deer with a highly risen horn crown is magnificent and fascinating. It is supposed the number of deer was high in Lithuania until the middle of the second millennium. The Wallachian Law adopted in 1557 forbid to hunt the deer. They got extinct in Lithuania at the beginning of the XIV century.
Count Naryshkin started breeding the deer near Joniškis, in Žagarė forest, in 1895. The territory intended for them was surrounded with high fences of poles. Later the deer were released from the enclosures and spread in the locations of Joniškis, Šiauliai and other locations of Lithuania.
There were 97 deer in all the forest places of Joniškis in 1938.
37 red deer brought from Usmen forest reserve of Voronezh to Lithuania in 1956 were released in Punia forest of Alytus district, Verškainiai-Šešuoliai forest of Širvintos and Ukmergė as well as Podauguva forest of Kaunas district.
14 more red deer were brought from the same Usmen reserve in 1972. They were released in Troškūnai forest of Anykščiai district.
Presently there are 15912 red deer in Lithuania. Their number in Europe is about 1 million. There are a lot of red deer in Austria, Scottland. 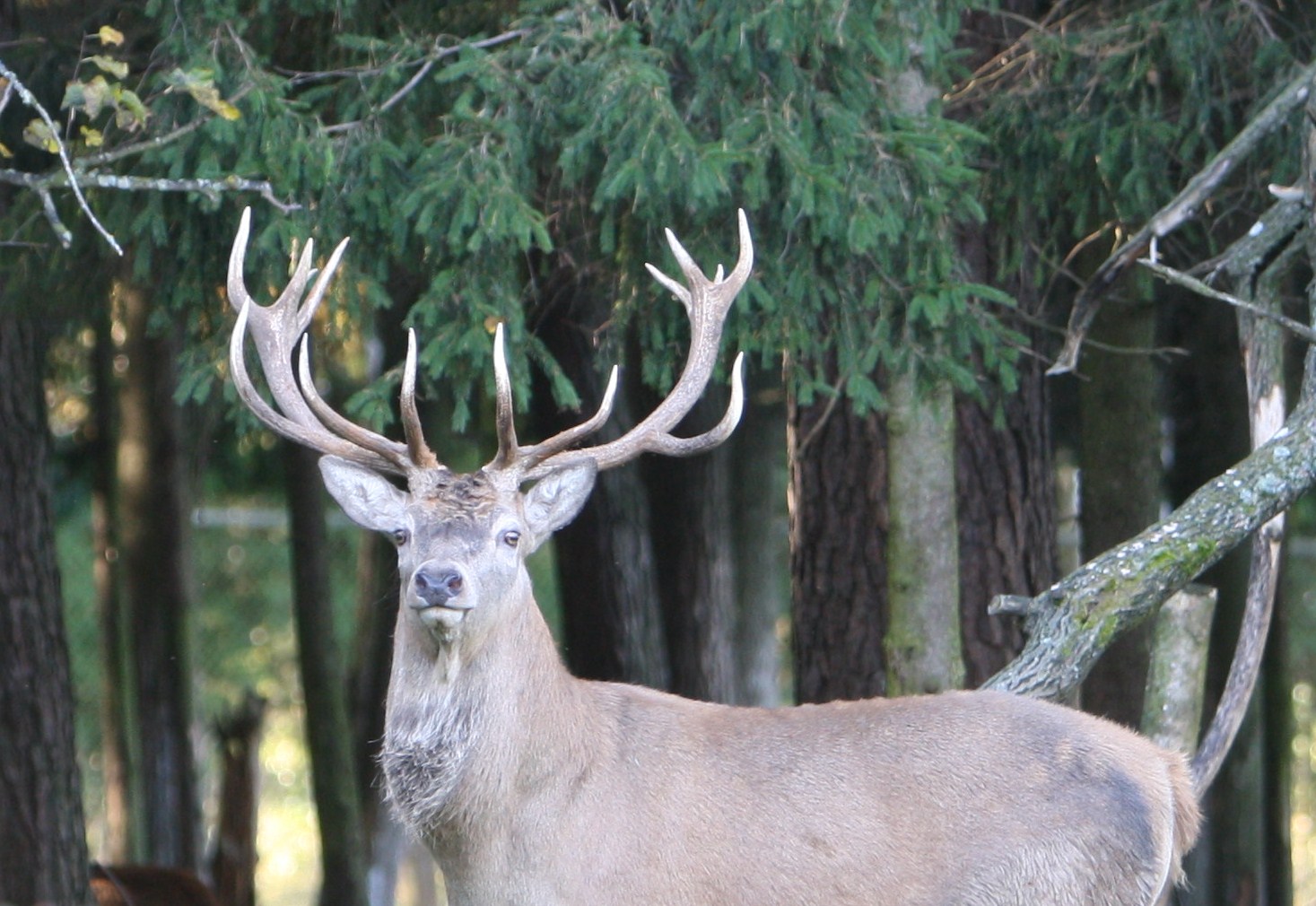 The climate of Lithuania is too harsh for sika deer. Photos from VL archive,

A sika deer is smaller than a red one, but the Creator did not spare beauty for it: a small head, a slim neck, thin and long legs and a spotty fell with the colours changing depending on the seasons. The homeland of the sika deer is China.
24 sika deer were brought from the Altay Mountains to Lithuania in 1954 (6 males and 18 females) and released in Dubrava forest of Kaunas district. Their number was 65 in 1966 and later the number of these animals ranged between 50 and 60.
The sika deer are very sedentary. The climate of Lithuania is harsh for them and the habitat is very different from broad-leaved taiga forests of Manchuria. It is difficult for them to survive in Lithuania. The animals fed with hey and acorns intensively in winter wander away just one half a kilometre from the feeding places. 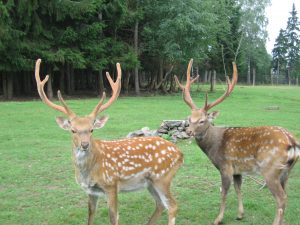 The homeland of this new species of ungulates in Lithuania is Corsica and Sardinia Islands of the Mediterranean Sea. There are few moufflons in Europe.
24 first moufflons were brought to Lithuania from Ascania Nova reserve to Lithuania in 1976 (11 males and 13 females). They were released in Strošiūnai forest of Kaišiadorys district. 39 more moufflons were brought from Czechoslovakia in 1977. They were released in Kalmiškė forest of Lazdijai district and there was a special enclosure for them.
The acclimatization of the moufflons in Lithuania was not very successful. The moufflons, which had escaped from their enclosures, died and those living in freedom were devoured by wolves. There are few moufflons in Lithuania and some of them live in Ieva’s menagerie. 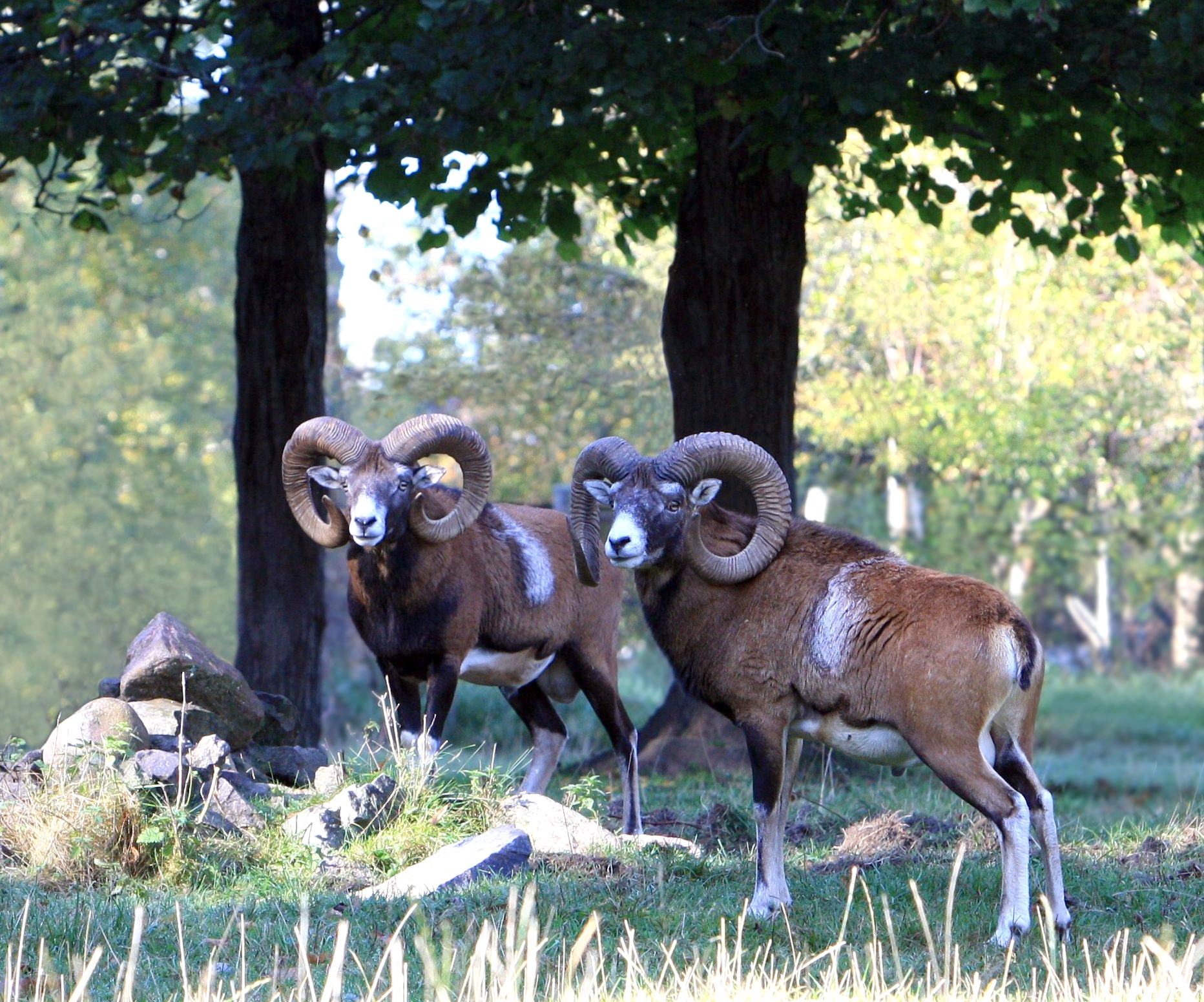 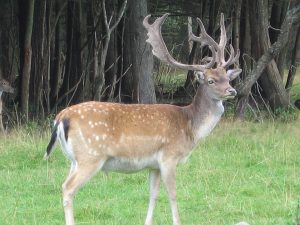 This menagerie was opened in 2001 and over ten interesting animals live in its enclosure. We believe your visit will be cheerful and memorable because of the acquaintanceship with the nature and a unique possibility to see its habitants, which you may have not seen yet, at close range.Over 30 graceful animals live in the shelter of the forest, in a 5 ha enclosure. You will see the red deer in the menagerie; there are even 20 subspecies of them. The sika deer, which were brought to Lithuania from the Altay Mountains in 1954 and now are bred in enclosures only, are called „deer-firs“ in the Far East; in the XVI-XVII century, the noblemen brought the smallest deer of the country – fallow deer – from the Mediterranean region to Lithuania and the mountain sheep moufflons, which are similar to domestic sheep, were brought to our country in 1976-1977.

You can see at close range the way of life of animals from different countries with different characters in the „international“ family. They approach bravely to the masters coming into the enclosure to offer their favourite feedstuff. In autumn you can listen to the roar of the deer.

You can also live in the territory of the menagerie: